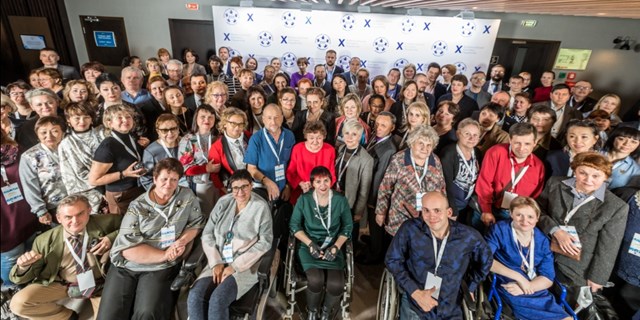 The Congress, which took place in late November — early December 2019, is a negotiating site among the best for public figures, leading NGOs and social activists to meet. They were hailed by Russian President Vladimir Putin and Prime Minister Dmitry Medvedev.

Patients' interests are the main driving force of the Congress. Those were represented by the leaders of voluntary patient organisations.

National health projects in improving the availability and quality of medical care, drug provision, and the development of the compulsory medical insurance system were on the agenda of the Congress.

A high-pitched discussion on pharmaceuticals supply for people affected by mucoviscidosis (cystic fibrosis) within the plenary session was the reason for the initiative of the Minister of Health to hold later a meeting with the Federal Service for Surveillance in Healthcare (Roszdravnadzor) and the Ministry of Industry and Trade together with doctors and representatives of patient organisations. At the meeting, decisions were made to develop medical care and ensure drug provision for cystic fibrosis.

The Minister of Health made a number of statements at the Congress. In particular, she spoke on the need for more interaction between governors and experts of the All-Russian Patient Union, as well as for patient organisations to monitor national projects in healthcare at work.

The attendees tackled another topical issue of empowering patients and protecting their rights. The experts from Russian and Kazakhstani corners discussed it at a workshop investigating the issue.

In total, the Congress attendees were able to listen to 35 plenary keynote statements by federal departments and All-Russian voluntary patient organisations CEOs. They were engaged to work out at least  28 topical issues in healthcare development, and, above all, 42 training sessions for public experts were held.

“The Congress celebrates its 10th anniversary as an authoritative platform, where partnering with federal authorities and other experts, health issues and solutions are discussed. Much has been done over the past years and we have much to be proud of, but even more needs to be done. I am sure that the patient community together with authorities, experts will continue to be able to jointly overcome discords, the best possible and working solutions, together managing the path of development in domestic health care” said Yuri Zhulev, co-chair of the All-Russian Union of Patient Voluntary Associations.

“The All-Russian Patients Union mainly works beyond the Congress venue. At our Congress, we are to summarize, discuss plans for the year to come with NGOs, authorities, experts, professionals and the medical profession, and working out resolutions informed by such discussions. Currently, experts are developing resolutions for a package to be submitted to the Ministry of Health as a message from the patient community. We also work out plans for the following year and are interested in ideas and feedback offered by professional market participants and patients. Despite obvious positive changes in the healthcare, issues in drug provision and the quality of medical care require a dialogue between government authorities and patients, ”said Yan Vlasov, co-chair of the All-Russian Patient Union.

1,200 delegates attended the Congress in 2019, who represented NGOs of patients, public councils for protecting the patients' rights, authorities, territorial compulsory health insurance funds, and the media. 78 Russian regions had their representatives there, Kazakhstan also had a delegation attending the event. All in all, the media referenced the Congress about a thousand times. The online broadcasting helped a thousand people within Russia and beyond to follow the Congress on the Internet.